The RED Epic Dragon camera is the first major update of the second camera system from RED, based in California. Their original camera, the RED ONE introduced in 2008, was the first super high res camera that was able to record in 4k. Although there are now a number of cameras that can do this, the RED ONE is still the only one that records in RAW, keeping it well ahead of the game, they then launched the EPIC, the first 5K camera and now the Dragon, a 6K version. Importantly, all REDS record in RAW. 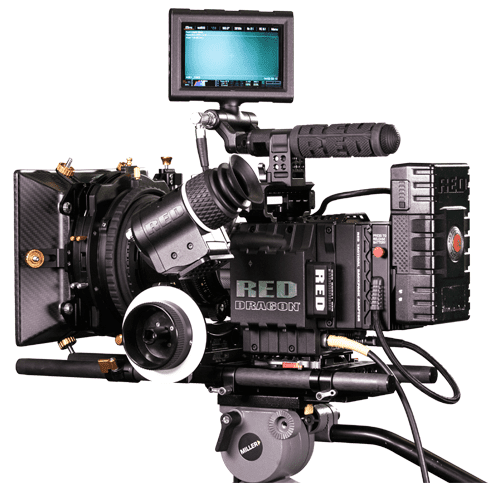 The Red Dragon 6K sensor is the highest resolution camera available today and produces outstanding images, whether they are for the internet, large HD display up to a 4k cinema projector. This camera brings premium cinema quality pictures to the cost of shooting on high-end HD video equipment. In addition, because it has a PL mount lens, there are endless options to use supreme quality cinema lenses with this system.

One of the benefits of using the RED EPIC Dragon is that the stripped down body weighs only 2kg (5lb). Consequently operating the camera on lightweight cranes, gimble systems or in confined spaces is very do-able provided you use small lenses and external power supplies. This small lightweight camera body makes it very easy for a Seadycam operator to run a 3D rig.

The red epic camera weighs 8-9kg (20lbs) when loaded with all the equipment normally required. Nowadays many of the accessories are made from very lightweight carbon fiber. It is also possible to obtain lightweight servomotors for zoom, iris and focus.

From an operative’s point of view, the camera (a kit camera) means you can configure it in many ways to suit your personal preferences, or specific requirements needed for the job.

Red software is freely available from the red.com site to resize and grade the footage to any number of file formats, ProRes, .mov etc. This means the material can be edited on any non-linear edit system and is native to Premier and FCPx.

The camera has 4 audio channels, these record at 48khz providing very high quality audio. However, because this camera has one foot in the film camp, people tend to record audio separately, but there is no reason why the camera cannot record audio as well as any other stand alone recording system.
Key Features
The RED Dragon camera has a number of key features: 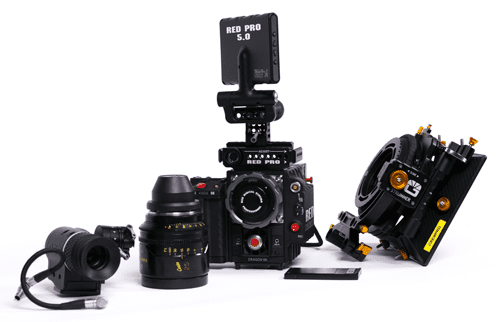 For standard use, the camera is usually set up with a project base rate of 25fps, a shutter angle of 180 degrees, ISO at 800, and compression at 8:1.

Depending on how you want the frame to look, you can play with the frame size, however, for anything that is going on TV we would use a 6kHD setting, which saves time in post because the division is easier than if we use a different frame size.

Once you have captured your image at 6K, you then need to play around with the image, and this is all done in post, where a resize and grade will be the norm.

Once the camera is set up and you are looking at the set, what’s different with this camera and another high-end cinema cameras.

Is this the best digital camera? RED Epic Dragon vs the Arri Alexa

The only camera you can compare to the Dragon is the Arri Alexa. This is a popular camera and produces some lovely pictures, however on paper alone it’s a little behind in spec, from resolution to dynamic range (this is a fantastic 16.5 stops and if you take off the motion mount (motion mount is a very advanced lens mount that has a LCD piece of glass between the back of the lens and the sensor, which can change density so you don’t need ND filters and is also a very clever shutter more on this next time) and add a regular lens mount with HDR, you can add another 6 stops to that. However, it does not have a true global shutter, and it can’t even record in 4K, and maxes out somewhere mid 3k. None-the-less this is a popular camera.

With all large sensor professional video cameras (this also includes the Canon 5d mark 3) when wide open you can play with the depth of field. This is a very important part of telling a story and without this control, your dead from the word go. Photography is all about framing and in that frame, we dictate where we want the eye of the viewer to go to. But if the whole image is sharp, all the time, it’s no good to you at all. So if you can use depth of field to pick up a face in a room or blast the foreground and background out of focus. This is the creative tool you have with the RED camera.

The Red Epic Dragon 6k is available for hire from Camberwell Studios in South London. For more information call the studios on 020 7737 0007 or email us at studios@camberwellstudios.co.uk