Film Noir began its life in the 40’s in the US. It was reminiscent of darker city nights of post war America where prostitution, drugs and crime were still in the shadows. Uses of smaller lighting set-ups and the advances of easier location shoots meant these Film Noir techniques could be deployed in new and exciting cinematic ways. 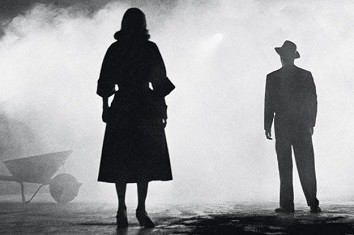 Emotions and moods often characterized by Film Noir are those of Alienation, paranoia, bleakness, disenchantment, evil and ambiguity. The art is bringing these emotions to the fore. Without the modern use of colour, special effects and other modern film techniques.

Film Noir narrative is often screwed and non-linear. Twisted camera angles called Dutch angles come into play and they also use great towering high and low shots to insinuate dominance or passivity in hero’s and villains. These are great cinematic devices for low budget film-making and can, and continue to be, deployed in many other films. Its use of voice-overs, flashbacks and edgy editing styles are practised to this day as well too.

The Film Noir hero is typically an Anti-hero and the lines between the heroes and villains can often be blurred. Ideal for a black and white, good vs evil, lightness vs darkness battle of the senses.

A good 1 or 2 point lighting set up is ideal. Nowadays the overly used soft light set-up floods areas. Ideal for larger scenes but not ideal for Film Noir. Use 800w red heads, 2kw Fresnel’s with barn doors and ideally a 1kw spot lamp with adjustable shutters. This will give a letter box or confined corridor of light. This type of lighting is diffused only really in situations were you have no dimmer and need to drop the intensity of light. Using ND filters can be much more effective. This intense lighting is called hard lighting. Depending on your aperture and shutter speeds you will need to work on the high key/low key basis. Ideally matching shots as you go. A high shutter speed will work well for the smoke you will undoubtedly be using in some scenes. This can also work well in crushing those black areas darker. Close the Aperture and you will reduce the light and the background will be nice and blurred and mysterious. Perfect for Film Noir.

If you don’t use enough light (800watts and upwards) you will end up with a picture that is full of non-noir grey and white. You’ll need to increase the contrast between the dark and light areas by adding higher wattage or moving the light source closer to the subject, plan carefully and safely for this. Remember: Black or White. No greys!

provides great textures and back drops. You may be lucky and get some natural moonlight for outside scenes. What action are you going to light in the scene? Is it a chase scene or setting the scene. Use these 2 examples below for a typical Noir set-up.

You may wish to have the character run through channels of hard spotted down lights against a brick wall in alleyway. You may want to insinuate that the street light is causing a very heavily backlit scene (use a 2kw with barn doors, out of shot facing towards the action/camera) If so, use a smoke machine and that will highlight the beams of light streaking through the shot. Take care with the weather as a windy night will cause havoc with smoke filled set ups. Film smoke from behind for the best effect. Also this back lighting can be a very good way to create shadows. Ideal for an introduction of a character and his or her movements without giving away their identity.

When shooting indoors, windows and blinds can create a very dramatic set of shapes and lines. Place a 2kw Fresnel outside the window pointed in. The closer the light the harder the edges of the blinds/window bars or window frame will be. It can be a great way to highlight a smaller section of face such as the eyes or a weapon thus adding greater mystery and subsequent tension, to the scene.