Puppets can be used for a manner of different purposes and goals. Puppets are not exclusively reserved for kids TV programmes. They can add a new approach and dimension to any corporate product or service and can add great characters to music videos and short films too. Puppets can be used to represent any manner of ideas and subjects and are easily mould-able (literally) for most gains.

Puppets are inanimate objects but with the right creativity and handling they can give a big voice to attract various clientèle. Puppetry is an ancient form of communication and entertainment and underused in most circles. Using puppets instead of presenters will give that corporate video a ready made ‘brand feel’

In this Production guide I will look at some examples of how puppets can really add to your project and the rewarding challenges that you may encounter. From marionettes in short films to brightly coloured, branded puppets.

The first step is to find an amazing puppeteer. One that can truly make you believe in the characterization of the puppet. It harks back to childhood days of Sooty Sweep and Sue. (spoiler alert….) We all knew that it was a hand in those stuffed animals, but the simplicity of the puppets did not detract from the story, and the personalities at hand! Move forward 30 years of technological development, advances in CGI texture- wrapping and Andy Serkis’s Oscar worthy portrayal of the ‘Lord of the Rings’s’ crippled and warped creature Gollum. His motion control-suited performance, and the right amount of rendering power can inject an inanimate object a heart and a soul. 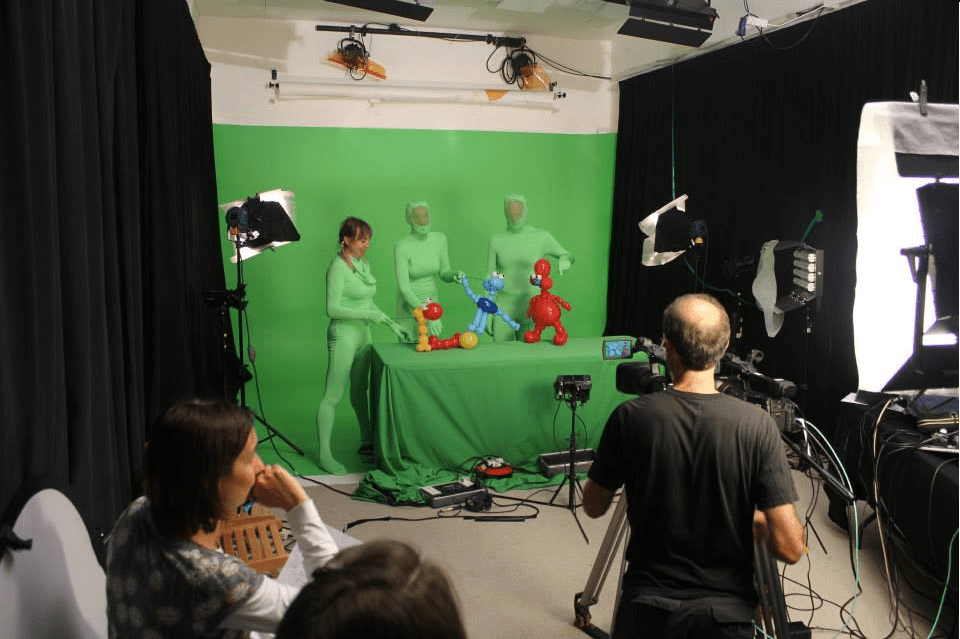 The idea is to convince the audience that they are witnessing a human interaction. When said audience member, looks upon a face a part of the brain is kick started into action this particular face-recognising feature is called the fusiform gyrus. This is a very complex and intelligent part of the brain and is mainly used, historically, to detect friend from foe in battle and society but when used is the distinction between real and fake, animate and inanimate. For example, when we look at a stationary item or object, or even a puppet however, we call on a different section of the ole grey matter! Less commonly known term being the inferior temporal gyrus (rolls off the tongue!) A true puppeteer will pull down these 2 barriers, and sections of the brain and convince the audience that what they are witnessing, is a realistic, life-filled being. Ideal for any product or service. As they say you are selling yourself. What better way than create a branded animal or creature that sells the company, logo, ethos, ideology by itself.

Puppets can come in many different forms. From simple hand-made sock puppets, Similar to those cute faces of the old school ‘Sooty, Sweep and Sue, to digitally controlled and detailed animatronics seen in Stephens Spielberg ‘Jurassic Park’. There can be huge differences in cost but the theory remains the same. Puppets and these types of animation are a dying breed as the effect of cheaper digital technology, CGI and shooting schedules ever decrease the need to for real life puppetry. People tend to steer clear of the logistics and hassle that can come with puppetering. Some of these include over working the puppeteers, the heat in the costumes, the quality of the fake fur or coloured texture of the puppet. The fur can get very dirty after a long few hours of use and they often need replacing on larger shoots. The puppeteer will often have spotters or assistants, at greater costs and replacing a whole puppet can be very expensive too. CGI eradicates the need for anything to be on set. A series of VFX and CGI people can edit the desired creatures in post without every having to visit any film or studio set. Unfortunately the cost outweighs the benefits of puppetry in most cases but as we have seen in the man behind Gollums performance, the future most definitely still lies with a central character pulling all of those humanistic strings.

A puppet is unique and can be formed in any manner possible. It is a summary of your companies personality and cuts right to the inner child in most of us and can be a great way to express product knowledge into easily digestible forms.