The Importance of – The Soundman (Sound Engineer, Mixer, Recordist)

Sound is used to create suspense and drama, emotion and reaction. Soundscapes play a role in virtually any moving image production.

It’s not just the soundtrack we’re talking about, it’s the noises and background audio you may casually hear and cast aside. These are all very important to the subconscious those sound bites make up a bigger picture. For example, the rustle of leaves to set an autumnal scene, the distant clanging of chains to signify capture, a referees whistle, general office noise, weather, or fun or sadness or… etc etc. The list is endless and every second of every scene will have been carefully designed to create the best possible ambiance for setting the mood. In the same vein, even long pauses of silences can be just as effective, as utilised in the film ‘Saving Private Ryan’. 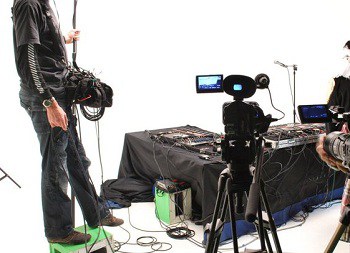 But who are the good folks that are there on the front line? (Private Ryan reference aside)

The ones right in the action?

Those who get up close and personal, hanging on every word spoken, every twinkle, crinkle, snap, crackle and pop, recording those minute details?

The sound engineer is the un-sung hero of the film world. They go to great lengths to bring you one of the most important of your senses. They can be holding a microphone boom aloft for 12 hours a day or in wading in a muddy field recording animal chatter at 2am. They could be down on their knees with their head(phones) in a bucket recording bathroom SFX’s. They are also there making sure some unwanted noises aren’t heard in key moments that would ruin the tension. Who listened to their mother when told to listen carefully?

The sound engineer is often found on TV and film sets and is right in the heart of the action. Boom pole with microphone in hand. This tool is useful and occasionally needs to get get right under peoples noses (literally!). This position is best for medium shots where you cant see below the waist. If on wider shots then the microphone on the boom pole will go above the subject. If they are walking then the boom operator will have to use their superior upper body strength the hold the boom aloft.As you can imagine this requires patience and skill to listen and watch the action. They must pay close attention to unwanted background audio too. Planes, trains, automobiles, animals and people are usually the guilty parties and a great sound man will be in tune with continuity too.

Larger shoots will have a boom operator, a sound engineer, a sound mixer and some assistants moving cables and guiding the boom op. Generally foley artists, sound designers, sound assistants work together on the filming too. Smaller shoots tend to try and save time and money by hiring an all encompassing sound man. These multitaskers will usually come with a hip sound mixer, a boom pole, plus several cables running off into the camera, the subjects radio microphones, headphones and sometimes to a vision mixer for live mixing. They normally provide all of this in their day rate but its always best to ask.

The sound man (or women) may work in a rigid live studio set-up which enables them to be sat a a mixing desk themselves and monitoring the goings on in the gallery. This can mean up to 200 + microphones for live set-ups, live music, presenters, talk-back (for crew to listen to instructions) and these set ups can take days to prepare and reherse.

There are several types of recorded audio that can be used and the producer will normally have most of this require information for broadcast including what format they want it delivered. Again, its always best to ask.

For smaller studio based shoots, (a single person piece to camera is most common) using a cameraman and sound engineer then the following is a basic set of hints and tips for getting the best audio and delivered in the most cost effective way.

Using a stand alone sound man or a sound team as described can add wonders in the pre and post production process. They can usually advise on location types, unforeseeable noisy situations that may arise (airfields, roadworks etc) and can be a very useful member of the team. If experienced he will be able to direct talent in movements (ideal for best audio) and even offer advice into the best practice and speech delivery too. Used well the sound man can add so many extra creative elements to your project and ensure those important takes run very smoothly.

Our advice, never underestimate the importance of the sound man.

Any questions? Do not hesitate to contact us we are happy to help.