Filming Against a Greenscreen: Key Steps

Filming against greenscreen (also known as chromakey) is a major part of most feature film and TV production. The same approach can easily transform a corporate video too. In this article we describe the key steps you should plan for.

Planning Your Angles
Before you arrive at the studio you should know what backdrops, images or themes will be placed in the background. Without this information your director and cameraman cannot plan for the shooting angles, heights and light sources that are required to ensure you can fit your footage into the planned images or 3D space. The best way to fix this is to create a storyboard that can be shown to the crew, before and during the shoot. This means they can bring the correct kit, especially lenses, lights and grip equipment.

Setting up Greenscreen Lighting and why it counts

The key to lighting a greenscreen is consistency: to create a single, consistent shade of colour across the entire screen. This is a separate challenge to lighting the subject and that can be managed with the conventional 3 point lighting approach. (back light, key light, fill light) 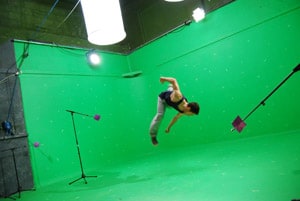 A common issue with filming against greenscreen is ‘spill’ which refers to green light bouncing off the green screen cyc and onto the subject being filmed. The way around this is to use a minus green gel (magenta) and covering some of your lights . You should also try and block out un-used green screen surfaces with black cloth or lightweight polyboard.

Best Practices when Filming Against Greenscreen

Positioning of the subject
The key to getting the best footage is being able to separate the subject from the background so they (or it) don’t cause shadows on the green cyc. This can be achieved in a number of ways. Firstly by moving lights higher on to the side of subjects and objects so the shadow is cast away from the framing. Shadows make it harder to remove (or ‘key’ out) in the editing and post production phase.

Greenscreen Care
Keep the greenscreen floor as clean as possible, and stop people from walking on it unnecessarily. Make sure shoes are wiped before entering the green screen stage area otherwise time will need to be taken to repaint green or remove marks.

Some simple advice on clothes, props and camera work.

Once mastered, green screen filming offers an amazing world of possibilities. This simple advice describes the basics and if followed, will help you get good clean footage.