This guest blog article has been written by Ashley Goodall, Consultant Marketer at Footprint Scenery in nearby Peckham.

Whether you are aware of  360 videos and the ‘ultra-reality’ they can provide or are new to them, this article will provide you a helpful introduction to the subject.

Nothing’s new under the sun: why 360 degree video is as old as Shakespeare… with a few twists.

With the dash towards 360 degree videos, super real experience, immersive headsets and videos, CGI and virtual and augmented reality it’s easy to imagine you’d never need to film anything contrived again, or indeed build a classic set. But, think again…there are going to be multiple opportunities for the design and production of all manner of scenic scenarios, it’s just a matter of adapting to the new technology and keeping traditional skills updated.

People love the sense of being in that experiential planet and this involves creating ultra-reality sets and props, great acting and total sensory stimulation. Whether or not you are wearing an oculus rift*1, or interfacing with technology the ultra-real experience still uses physical props that have to work with technology beacons, projection mapping and sound, and these have to be more real than the real thing…

From our perspective, the job of production has shifted from 2D film sets, to 3D theatrical reality, and ensuring granular detail works with technology and the navigation of people through this new panorama. For Secret Cinema’s Star Wars last year, not only are we re-creating a planetary world that is tactile and robust, but also feels like the real thing. And for Alice’s Adventures Underground, for Les Enfants Terribles, the creation of theatrical sets for the public to experience is a long way from sitting watching it in a theatre. Similarly, when we are engaged with 360 video, the sense of an ultra-reality film set is a given, and we can also deploy some handy illusional tricks that keep costs ridiculously low, while delivering an immersive panorama.

To give away some trade secrets, we worked with Cheil on creating a diorama for Samsung’s Galaxy S & launch, building a micro Perspex cityscape to create a change of perspective. We achieved this by using miniature model trains, lighting and action that was filmed and scaled to project a branded immersive experience for broadcast on 360 video and shown via VR headsets. We were effectively ‘Lilliputting’ the scenery for technological amplification…think that’s neat? Keep that thought…and let us know when you want to save thousands on production budgets, and project the sense of 3D immersion direct to people’s heads! 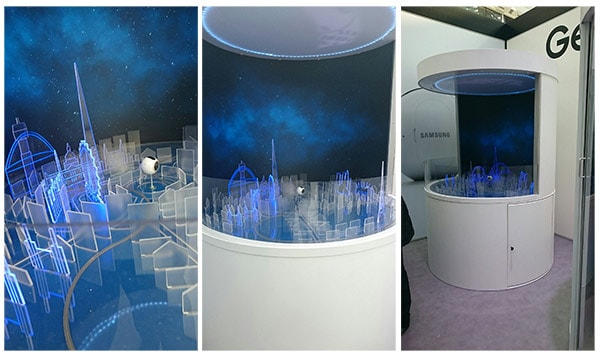 Finally, as you know, there’s very little that’s new in life, and theatre in the round is really a physical manifestation of 360 Video except Shakespeare got there first. And with that thought, we’ll share our next article on ‘Theatre in the Round’ in the coming weeks. Stay tuned and bear in mind, the singularity of ultra-reality, total immersion and technology are where things are heading for film production designers and 360 degree video.

Ashley is consultant marketer at Footprint.