We have recently taken bookings from a number of production teams experimenting with 360 degree video technology.

It’s easy to understand why it’s so popular. Not only does it capture your audience’s attention more, it holds their attention longer – by 44% according to statistics. One study found that 360 degree videos produce twice as many conversions as traditional ones, with click-to-purchase rates up to 14 times as high. In fact, it was one of the main focal points of our Video Production Workshop not so long ago, with our 360 Degree video expert, Tom Watts, receiving many questions about this technique and his 360 degree video camera.

So we thought we ought to find out more. Here is our introduction to 360 degree interactive video. 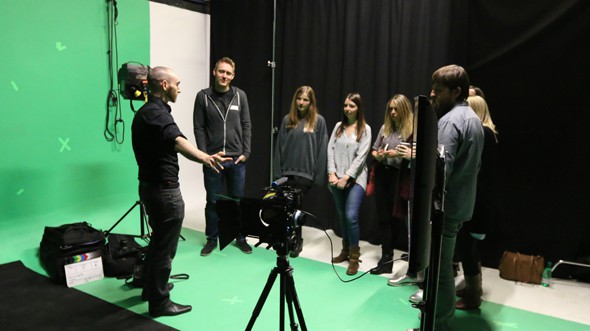 What is 360 Degree Video

360 Degree video gives an immersive experience. The viewer is in control of what they see, what they do and what they watch. This alone gives 360 degree a massive advantage to more traditional videos. Interaction means data about your audience, so while they’re more engaged with your content, you can learn more about them.

360 video got its start way back in 1995 when the Immersive Media Company filmed a basketball game using a camera on a tripod in the court;but it was another nine years before the technique began to get mainstream attention with the release of the Dodeca System spherical 360 panorama camera. Two years later, Google Streetview captured the public imagination and since then the major challenge has been finding viewing platforms to expand the technology’s reach. Most viewers don’t – yet – have Virtual Reality headsets they can use to enjoy the full immersive experience of a 360 movie, but there are other ways they can engage with it and still get more from it than from a traditional web video.

Developed through the application of science, the panorama camera takes its inspiration from nature, where multifaceted insect eyes can see in many directions at once. In a production studio like ours, you can use it to create your own 360 degree interactive video for your clients.

Every marketer wants to make use of the world’s biggest online video platform, so it’s good to know that YouTube 360 video is an option.YouTube launched 360 video  in March 2015, and it’s now good enough to livestream. Since September 2015, Facebook 360 video has also been available, so it’s worth developing films with both these markets in mind.

Watching a 360 film is much more like interacting with the real world, and marketers love the way it gets viewers involved. People are 66% more likely to watch video they can control and interact with. As mentioned above, interaction means data… and valuable data at that. Learn about your viewers behaviour, preferences, how they react to different stimuli and, most importantly, which parts of your video content they were most interested in. This can all be used to improve how you communicate with your audience in the future.

It also gives filmmakers a much wider canvas to work with, expanding storytelling possibilities and giving a new lease of life to your content. There’s a huge market for this type of video and, because it’s a young art form, there’s still a lot of room to innovate and create something that will really stand out. At our Camberwell studios we have everything you’ll need to get started.

When you’re experimenting with a new approach to video production services, nothing beats seeing what other people have managed to achieve with it. You’ll need Google Chrome to view this 360 Video, but it’ll give you a fresh perspective on shooting in London.

YouTube’s own #SnoopaVision 360 video, made in partnership with Snoop Dog, became a viral hit when it went out on April Fool’s Day, and the joke is extended nicely in this YouTube 360 video series. What YouTube really caught onto here is the enthusiasm viewers feel for 360 degree interactive video technology, and a well made business video that uses it can expect to get serious attention.

What to find out a bit more? Get in contact with us today.