Made at Camberwell Studios

This blog looks at our previous music video clients who have booked both our Studio 1 and Studio 2.

This blog looks at our previous music video clients who have booked both our Studio 1 and Studio 2. Some of these artists are flying high on playlists as we speak and some are still trying to find their feet and niche. We wish them all the best of luck.

We start with a look at a local band who are making big waves on the mainstream circuit.

Who are they? The one and only (well two and only) Aluna George (Aluna and George who make up the two piece). Aluna is a local girl who made her first few videos here at Camberwell Studios.

People are starting to rave about her and her synth junkie band member George. Radio stations across the country are playing their songs on loops in seems, although never overplayed the music is a fresh take of minimal synth pop. Listen and look at some of their videos below….

Another up and coming band who made a video with a fantastic production company called Agile Films. The crew are super nice and they seem to be forever shooting so they all must be doing something right! Their video featuring Alt J can be seen below. For those of you who don’t know then read our handy band bio section just below their released video here.

Alt- J :alt-J (delta)’s name takes a little explaining. Pronounced “alt-J”, the delta sign is created when you hold down the alt key on your computer keyboard and punch ‘J’ on a Mac computer. The symbol has a deeper meaning for the band, as guitarist/bassist Gwil Sainsbury notes, “in mathematical equations it’s used to show change,” and the band’s relatively new name came at a turning point in their lives.

Now onto Goldie. The Drum and Bass DJ who is making a music video that came out last year. 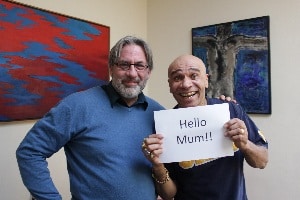 Our Director Andy’s Mother spoke to him of the morning of the shoot and in passing enquired if we‘ had anyone famous in the studios this week’? Andy replied Not anyone you will have heard of Mum’ (bearing in mind she is quite old and not an avid drum and bass fan – although I could be wrong) Just to prove it to Andy’s Mum, here is the picture below. She was aware of him as she had been flicking through the TV channels and caught some of his performance for the BBC symphony orchestra! Well remembered Mrs Woodruff!

Also featuring on this blog are legendary band, Basement Jaxx. (see below pic) Very nice people they are too. They were in a trying their talented hands at making their own music video. Felix from the band attempted his own stunt on this particular shoot! He asked his vocalist to jump on our green boxes and demonstrated, in true hands on director style, only to nearly do a somersault and land face down. DJ, Music Video producer and avid and amateur stuntman. Is there any end to his talents?

Over the next few months we will be gathering all of our previous clients work and combining them all to make a great big ‘best of’ video that really aim to showcase (and shamelessly name drop) the studios and what we are capable of in terms of preparation lighting set-ups, production scale and the types of people we are happy to work with again in the future.