We were commisioned to organise a TV drama recon for a Chinese TV company about modern day sailing. The goal was to provide some action to intercut between interview footage of contributors discussing the challenges of sailing. The client wanted to use actors, costumes and CGI to bring an an ancient Ming Dynasty character to life.

Six hundred years ago Admiral Zheng commanded an enormous sailing fleet of trading vessels, warships and crew. He went on epic and dangerous missions ranging as far as Africa. His wide ranging global domination was cut short (as was his member – he was famously a eunuch) as Ming wanted to concentrate its financial efforts inland to protect their borders from invaders across the continent. His legacy certainly lives on in China and the vastness of his fleet, and the power he commanded would make a great piece on its own.

The Start of the Film Production Process

Before we embark on this particular tale it is important to note some of the difficulties in dealing with 3rd party clients. Especially overseas, especially with language and cultural differences too. This can lead to miscommunications in creative styles, description of actions, signing off tasks and other sensitive issues. Luckily on this shoot we were dealing with some very sympathetic and enthusiastic clients who were incredibly supportive, and communicative throughout.

Costumes for the Films Production

Our first port of call was to look at costumes, the main visual presence in the script-less story. The Admiral’s look would give his character the iconic status the client was looking for.

I contacted Astrid Schulz, a fantastic stylist who would be great for the job. She had some instant ideas on where to start and who to talk to, and even some friends living in China who could help.

We started researching together, sending links back and forth and the one thing that struck us was the difference of opinion in the Admirals clothing.

Producing the Film to the Clients Vision

The client was keen to show the legend, often drawn with his iconic clothing in majestic portraits standing on his ship (see picture below). 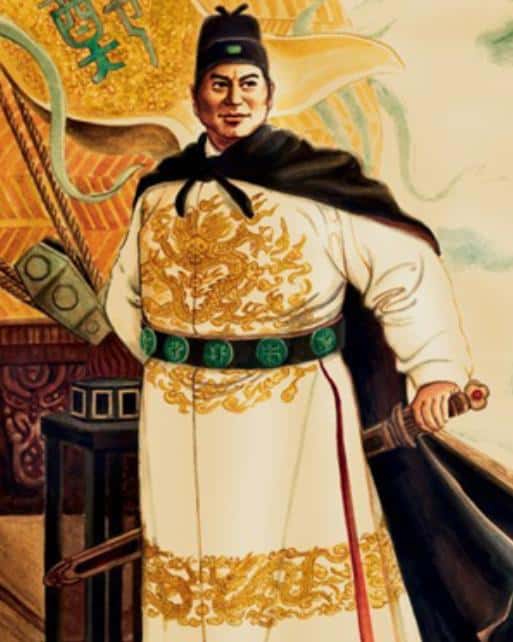 The admiral’s finery on show, the dragon emblems and intricate designs would strike fear into his enemies and rivals and elevate his dynasty into stuff of legend in years to come.

We had to do this era, and the titular hero, justice. Where do you source 15th Century Chinese naval wear, and convince our Chinese clients that the costumes are as authentic as possible?

We were quite sure that they weren’t available off the shelf in the UK – or anywhere in Europe. A custom make was the only real solution.

Astrid sourced a Tailors website in China that could create custom clothing from almost any fabric, in any style, from any Chinese era – great news! The pictures looked great. Lush fabrics, suitable for a decorated admiral. The smock we saw online, aided by Astrid’s crafty sewing, bespoke belts, sashes and robes would look amazing on the actor.

We hastily and excitedly purchased all that was needed from the site and planned the rest of the costumes, in the hope they would arrive in time. The tailors turnaround time was 12 days and we had over 3x weeks to get everything planned and made, even with fluff up timings planned in we had lots of time.

Casting for the Film

In the meantime, wardrobe for the other cast members was simple enough – hats, beards, sandals – all dropped onto our doormat from several different suppliers, but no Admiral smock, hat or shoes.

We chased the China connection to see where they were. No reply. Had we been fleeced? It was touch and go as to whether it would even arrive on time for the shoot, let alone time to sew, customise and fit.

Astrid worked her Plan B and with less than three days to go, and a delivery window of 48 hours, , calls were made to alternative ethnic clothing and smock suppliers in London to see if they had anything. Just as we were about to press the panic button we received an email confirming the items had been sent. What a relief, if only for a fleeting moment.

On a journey seemingly more epic than of the Admiral himself, the costume was to stop agonisingly short at customs in Germany for lack of a £20 import fee. Astrid quickly got the items released from customs, picked it up, built a sewing workshop and called in several favours, job done! What a relief.

On that note, and with the shoot now complete does anyone need a well-travelled, well-worn 15th Century Chinese Admiralty uniform? I thought not. Looks like we’ll be hanging onto this until the next dynasty. We now had something special to drape over some very broad looking shoulders.Casting for these great shoulders, was thankfully much smoother. That’s not to say it could have all gone wrong at this stage too. I scoured the net and contacts to find suitable actors who would give the iconic lead role the credit it deserves. I was careful not to offend any clients by my inherent lack understanding of Asian ancestry. I am pretty sure I could have offended a chain of clients by choosing another part of Asia for their leading male. I picked some options I thought suitable and sent them onto the clients.

Luckily they were happy and approved in very quick time indeed. The stage was set. Eddie Bagayawa was a loved choice to portray Zheng He and promised to do him justice. 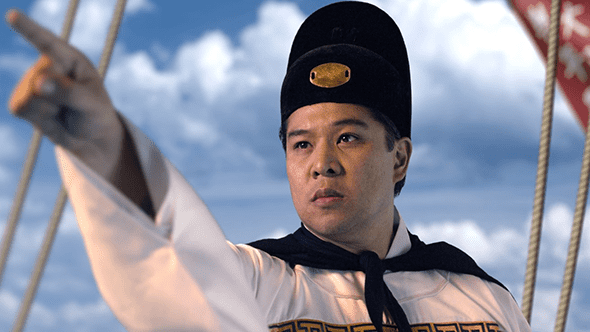 Eddie Bagayawa had the right look. He looked commanding and serious on screen but was the cheeriest chap I have ever met! He works mainly in TV production so he knew of the challenges on set and was a great help throughout

Camera, Kit and Crew for the Film

Shooting such wonderfully detailed period costumes required and deserved a DOP and camera that was nothing short of brilliant.

The only choice was to shoot on the RED Epic Dragon 6K cine camera, with some beautiful Cooke Lenses. This was welcome news to the editor Keith from Looper Creative, who was also very flexible and clear with his requirements, The RED footage gives a great key and lots of options in post-production. 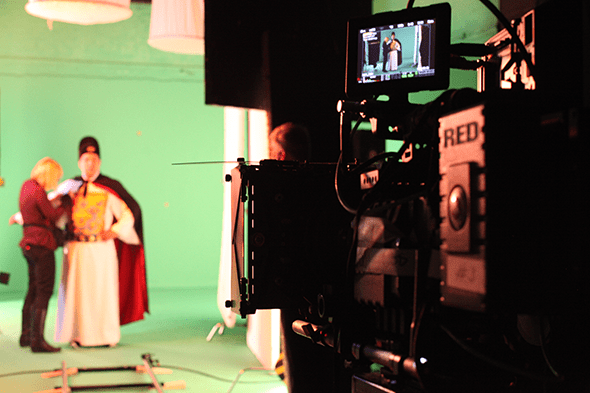 Finalising the Film – The finished product

A super camera, an amazing explorer and dedicated actors deserve to be teamed with a wonderful crew. Everyone from make up, runners and even the very enthusiastic and relaxed client were present to offer their support in any way possible. It went off without a hitch. Apart from some concerned glances from me towards Eddie who was worrying close at hand to a pepperoni pizza and his white woven silk garments. That could have been interesting!