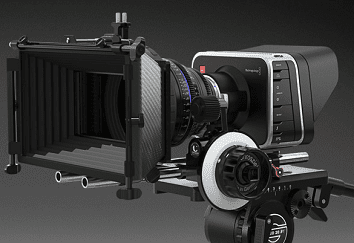 The Black Magic Cinema Camera or BMCC is able to do 13 stops of dynamic range and yes, it’s very impressive.

The highlights have a very filmic roll off and the camera retains so much highlight info that you actually expose more to the right instead of the left like you do on a DSLR. That awful digital video look, the blown light hot spot sort of look, seems non-existent on this camera.

The colours are lovely; the skin tones you can get, are milky and smooth and there is so much recoverable light and colour info available in post. The log mode is very flat, so you really keep so much information in the video file. The sensor grain is much more beautiful then the typical digital camera.

ISO goes up to 1600 and the low light is good enough, you can shoot in darkish places and you can really pull stuff up in post. It seems like you could pull the 1600 ISO to 3200 ISO in post and it still be usable if needed. From what my eyes have been telling me, 800 ISO is the sweet spot for the camera, I would not move it from here unless you really have too.

Here we have a few issues it uses a Canon mount. Though now you can buy a micro 4 thirds mount. The good thing about the canon mount is nearly all canon lenses work with it and the image stabilization and aperture controls work well.

Another problem is the sensor is smaller then 35m. On the plus side this means there is more in focus, that can help for a lot of projects as a catch all camera and getting all the cast sharp and in focus.

The negative is that as the sensor is small in comparison to the mount. You end up sampling from the middle of the lens. Not that big a deal I guess, but it does mean if you are using older lenses, your not sampling as much of the lens as possible, so it softens the image a little.

(You can sharpen in post as you have so much info so its not a big deal, though that does make focusing more difficult as the image on the back of the screen can be a bit soft with some lenses).

With newer sharper lenses it is not as much of a big deal, but you still you loose a bit of the characteristic of the lens. Also the crop factor can be difficult, its just over double, so 50mm becomes like a 105 or something similar so suddenly you have no wide glass.

For example, I was using a Nikkor AIS 18mm. On the Canon 5D its epic and super wide, on the BMCC, pretty much a 45mm, so a standard length. That’s a big difference, so you may need to buy more glass. But what do you do? You want at least as wide as a 24mm equivalent to cover yourself.

You can find a 2.8 zoom that will go to 10mm or 11mm, though at 2.8 its very difficult to knock the background out of focus. (I’m not DOF crazy, but I like to soften the background a bit).

So then you say, well I will just get the M/4 mount version, lots wide fast lenses and so many cheap adapters available to other great lens mounts. But…. It’s a passive mount; this means no power and no Image stabilization. Image stabilization in my opinion is pretty important to using the camera free hand and with no power going to the lens, this rules out a lot of modern M/4 lenses. So the choice of mounts is yours, none of them are perfect.

As you know, rolling shutter is bad on DSLRs.

The rolling shutter on the BMCC is in my humble opinion is about the same as Canon 5D mark 2. Though it can feel a little worse because you end up using more zoomed in lenses because of the crop factor. For example you want some nice DOF, so you stand back more from you subject and use your 50mm at 1.4, so then you get the rolling shutter of 100mm equivalent.

You get, Prores, Avid DNX and Cinema DNG still frames

The amount of info recorded in this format is amazing, you can bring white highlights right back if you shoot it right and the amount of information and detail that is there is stunning.

Roughly 8-10GB a minute so you have to be very careful. You’d need to spend an extra 150 on hard disks almost instantly to accommodate it.

Think 1min is 8GB, so then you convert it into and editable format like QuickTime 444 (depending on your work flow of course). So now you’ve got nearly 13GB for 1min of footage and you haven’t made any back ups yet.

Lovely! Just lovely. I don’t think it’s as sharp as the cinema DNG, but you still can sharpen it in post. I actually like it a little softer. The ProRes 422 with the log mode used gives you so much latitude in post. With a very affordable 240gb solid-state drive, you can get hours and hours of recoding, on one drive into an immediately editable format. For multi-cam quick turn round projects, this is just amazing. Most of my projects are shot on ProRes.

Its built pretty sold, looks lovely and feels like a premium product.

There is nowhere to hold the thing except the canon lens mount part, which is weird.

It scratches very easily though, look at the paintwork in a funny way and it will peel off.

Hmmm well, here is where we get some problems. See below.

You can grip the sides, but to be honest the camera should have been the other way up. The extra handles you can buy are a bit useless frankly. You can hand hold this camera, but its nothing like a proper camera or a DSLR. And if you are going free hand, you will probably need an IS lens, though you could get by with out though it will be much more difficult. A basic cheap rail rig with handles can make a big difference here.

Lovely, but a bit useless, Its very reflective and points at an angle upwards, its always getting reflections. Always!!! The only output is SDI, so you have got a camera at a lower price, but it can only plug into higher priced monitors.

Terrible. Internal mic is awful, pre amps, doesn’t sound nice at all and it uses Jacks not XLR. Why? Also no audio monitoring. After a year of release this is a bit unacceptable for a video camera!

It has an internal battery that cannot come out.

The battery lasts about an hour at most and a lot less when using IS. The battery indicator is in a world of its own. One minute its full, then its at 50 then its at 75 then back to 50, then 25 then up to 50 again. You have no clue when it will stop working. Very frustrating.

This means you need an external power option, that’s fine, but why black magic have not made their own is beyond me. You can buy a 5D battery adapter for around 50 that plugs in to the power plug, I don’t know what its like but it might be a good, cheap option.

Double tap to zoom in, which is annoying as sometimes the double tap can make the camera move a little. If you single tap you get this metadata menu. So you always end up going into this menu instead of focusing, which will drive you up the wall and there is no way to change it. The camera always focuses to the centre, you cant change that, so want to check critical focus on something at the side of the shot, you’re out of luck!

You never know when this camera is full, there is no recording time information on the camera, and you also can’t delete footage on the camera either. After a year of it being out, this is pretty bad too.

So you have to take the SSD out, plug it into a USB 3 reader (you could use a usb2 as well but that would be slow). You copy the footage like that and you also format the drive from your computer. You need an extra piece of software for windows to format the SSD.

Seagate go flex adapters are a very light portable way to plug the SSDs into your computer.

You get it free with the camera, which is great. Remember if you rent the camera that it may not come with the dongle to use resolve. Resolve is very important to the raw work-flow as it allows you to easily and quickly check and conform the footage. It’s a pretty big deal to make sure you have this software as it massively speeds up the raw work-flow.

Should you buy one? With the 600 off price cut, its does make it pretty attractive, for a studio it is great, for green screen and special effects it will work a treat.

It’s a love hate relationship with the camera, though the truth is you can make it work. To know you have access to some decent recoding formats inside makes it a good camera to have in the bag and you could certainty do a TV show with 3x cameras and like a full frame as an extra beauty shot camera. In a nutshell you need to spend time and learn how to use it. It would very much improve with a small rig to give you something to hold, and some extra way of powering it. An active m/4 mount and a well-engineered cheap clip-on power system would transform this camera.

All in all, the camera has some very silly things going on, but the image quality when you get it right is stunning. Finally a camera with a decent recording format like ProRes and of course there is raw too! So there is still a lot to love. Plus it’s a very sexy looking piece of kit and you get some great software for free.

Here is a video review of the camera:

Words and video by Chris Cory: