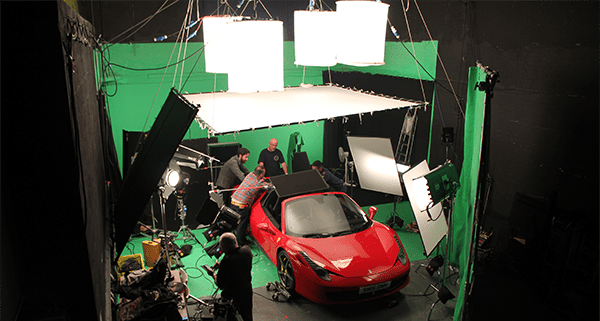 TUES AM at Camberwell Studios
One week, on an ordinary Tuesday, I received a call from a Los Angles and Chicago based production company, Odd Machine, They wanted a production space where they could film a commercial for a mobile phone – a commercial featuring a big Bollywood star.

TUES PM at Camberwell Studios
They were flying into London on the Wednesday. ‘No problem,’ I said, and we booked two full days for them in our large studio 1. The challenge came when conversing with several parties in different parts of the world. Working with offices in Chicago and LA was complicated by time differences. Because there was an Asian London connection too, things started to get tricky with client sign off, details, storyboard changes and more – but we got through it.

WED AM at Camberwell Studios 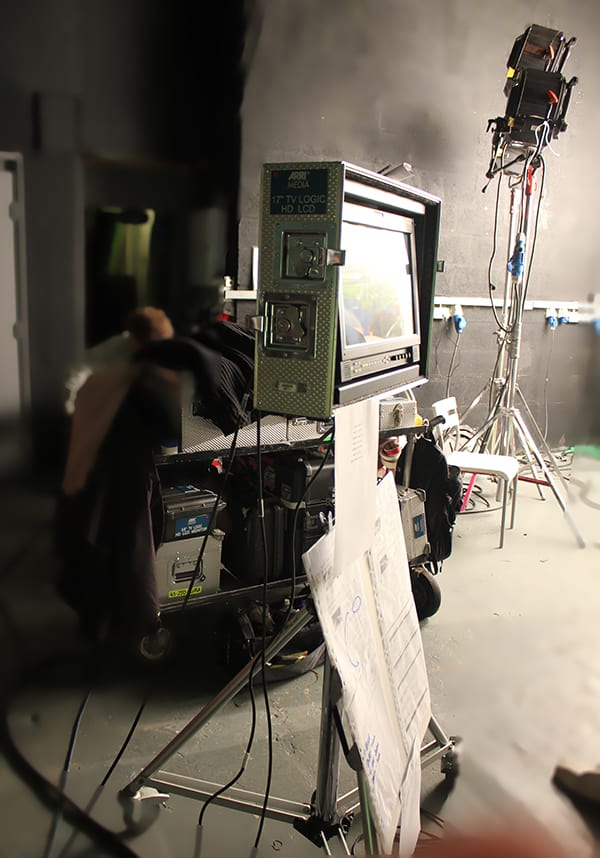 I received email from US crew members requesting lots of extra kit after their clients made changes to the storyboard. These were changes that required a lot more kit just as it emerged that less US crew was available than we’d expected, and an original supplier dropped out.

WED PM at Camberwell Studios
Our client needed help. They were flying the day before the shoot and needed some advice on where to source locally based crew at the last minute. After several discussions with their East and West Coast branches, busy cameraman and DOP’s, we had a clear idea of what was needed and where to source it all from.

WED PM at Camberwell Studios
I reviewed the new storyboard with my team here and conversed with the crew in the US, and together we formulated a logistical plan, discussed our plan B and started calling around. They needed wide angles, low and high angles to cover lots of shots and they also needed dolly and track too. We decided that a slider would be better for the job and for the camera and lens arrangement being used. It would make focus pulling easier too.

For these movements, tracking markers needed to be added to the green screen. This would help with the already complicated post production work they were undertaking, so they could manage a very quick turnaround. The large amount of footage captured on the shoot was handled carefully by our trusted data wrangler and kit despite the fact that we had to source them at the last minute too.

THURS AM – The rig day at Camberwell Studios
The clients arrived! They were just in time to see their beautiful Ferrari turn up on the trailer. We drove it straight into the space. Everybody said hello and it turned out that one of the UK crew knew one of the US crew. It’s a small world after all!

We showed the clients around, familiarised them with the facility, connected them to our Wi-Fi, gave them some strong British tea and coffee for their jetlag, and were ready to begin. The real fun started when we had to factor in space for the TV star’s trailer to park in the drive. We pointed the clients in the direction of one of our suppliers and let them deal with this vital and overlooked production element. Meanwhile, the crew were getting on famously. It’s good to know that you can throw together professionals like these from opposite sides of the Atlantic and eventually they all speak the language.

Our team set up the lighting and ordered some additions from our supplier which arrived that day so we could be fully prepared for the shoot day.

THURS PM at Camberwell Studios
Part of the clients’ desired look was a bright daylight shoot. To create this effect they needed a 15ft square grid cloth suspended over the stage area from our rigging. We used our studio scaffold tower to ensure that this was secured safely and correctly and that that our space lights were evenly balanced.

This arrangement all had to change again for a night shot so we added several layers of colour correction gels to our 3x dimmable space lights. This was to help light the green screen and try to hide the reflections bouncing off it, and it worked a treat. All part of our Studio 1 pricing!

FRI at Camberwell Studios
The car had to be moved several times to cover all of the shots needed. The clients needed head on shots, side on shots and shots from above and behind. We were tasked with sourcing some car dollies which enabled the car to be swivelled on the spot to save time. If these weren’t used then the car would have had to be moved by hand and it would have eaten up the day. The car dollies were a life saver and a very inexpensive way to ensure the safety of a very expensive prop! To make the movement of the car look realistic against a desert scene which would be added later, some moving lights were used.

If you need help in lighting a car for a green screen please see our handy guide here:
To help put all the pieces together we called on our experienced grip (dolly grip for US clients), plus a 2nd AD, sound engineer, a DIT and several runners to bring their expertise to the party. We also hired in a full lighting package, dolly and track, green screen and several other 3rd party equipment suppliers too. Everything was delivered on time and on budget.

FRI PM at Camberwell Studios
We were able to get everything delivered by the rig day on Thursday, in preparation for the big shoot day. Of course there were some extra additions and some issues no one could have foreseen, but with a good team and a flexible approach throughout, we got the job done in great time. The client, and their clients’ client (the Bollywood star), were all very happy with their experience.

THATS A WRAP!
This project was developed at very short notice and, of course, would have benefited from more time, but it was a great challenge to co-ordinate the right kit and crew for a very exciting job, and we’re very pleased with the way it came together.