The Role of the Make-up Artist

Hair and make-up are key elements in the look and feel of most pieces of film and video. Consequently make-up artists are important crew members and work across many different types of project from fashion film/photography, music promos, commercials and films.

They can change a modern man into a victorian woman turn a tired looking supporting artist into a supermodel and transform regular Joe into a beastly thing of wonder.

They are usually the first port of call for any cast member and this initial meeting is important. A good make-up artist will make the actor or actress feel relaxed. 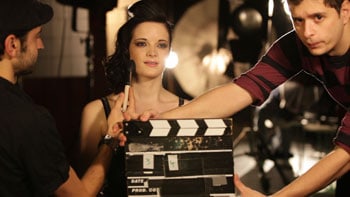 This can be vital if the part involves nakedness or if its a big screen début. Sometimes the make-up artist can assist them with their lines by acting as a sounding board which helps them relax, feel positive and focussed.

Think of it as the counsellors chair as well as a make-up chair too! Make-up artists don’t just slap on the make-up. They are generally very experienced in all manner of productions and what is required. They may have to adapt to the needs of their client at the drop of a hat and occasionally have to work very quickly at a minutes notice.

Good make-ups artists will be well versed with the script and shot list for the day so they can assess timings and whether any alternative actions is required in the day.

This is especially true with prosthetic make-up as this can take up to 4 hours or jore and is crucial to get the look right. Sometimes directors and producers have their hands full with the shoot, so they are unable to check progress of the make-up artist and sometimes only get a full first look at the work when the subject arrives from their green room or trailer for their first take.

If the set-up is complicated, for example period drama wasp waist corsets, beehive hair styles, wigs and white faces then they will often factor this into their proposal so the team can plan around this.

Their work in the green room is calm and relaxing for the subject. A good make-up artist will set their stall up to offer a very serene work environment while all the madness is going on around them.

Any wrong moves or slips or mistakes can mean wiping all the make-up off and starting again.

Once on set and their work OK’d, their new role is to pay attention to the continuity of the actors under those hot lights. With repeated actions sequences or weather changes the make-up will change and its the make-up artists role to take the pressure off of the director.

Usually on larger shoots the Chief Make-up artist will work with the top stars and the make-up department will work on the other cast. Sometimes they will be applying make-up to streams of extras all day and will never set foot on the set.

Sometimes they are bought in to consult on previous projects they have worked on and sometimes they focus on nothing but blood and guts in the prosthetic department.

Usually on smaller shoots, ‘Make-up’ artists have more responsibility and may be more deeply involved in the filming: for example deciding on 3rd party suppliers (e.g. prosthetics), meeting with the production team and working together on the overall look and feel of the project.

Rather than just being make-up to a series of instructions they take more creative control and input a great deal to the director. They make sure that the subjects do not have allergies or anything else that could affect the application process.

Makeup Artists will join their ‘made-up’ actors/actresses on the film set. Every now and again during takes and between scenes the may have to touch up the make-up and make sure that continuity is consistent throughout. Make-up artists can be used very simply to apply simple make-up lots of times, or complicated applications that really ease their star of the project into their roles.

Any question? Do not hesitate to contact us we are happy to help.