Here at Camberwell Studios, we are fortunate enough to provide space to many creative and exciting productions every week. It always amazes us how our clients use the same space in so many different ways. Directing duo ‘Bing Bong’ were kind enough to walk us through their process and experience of using Studio 1 on a music video shoot for legendary jungle/reggae artist – General Levy. 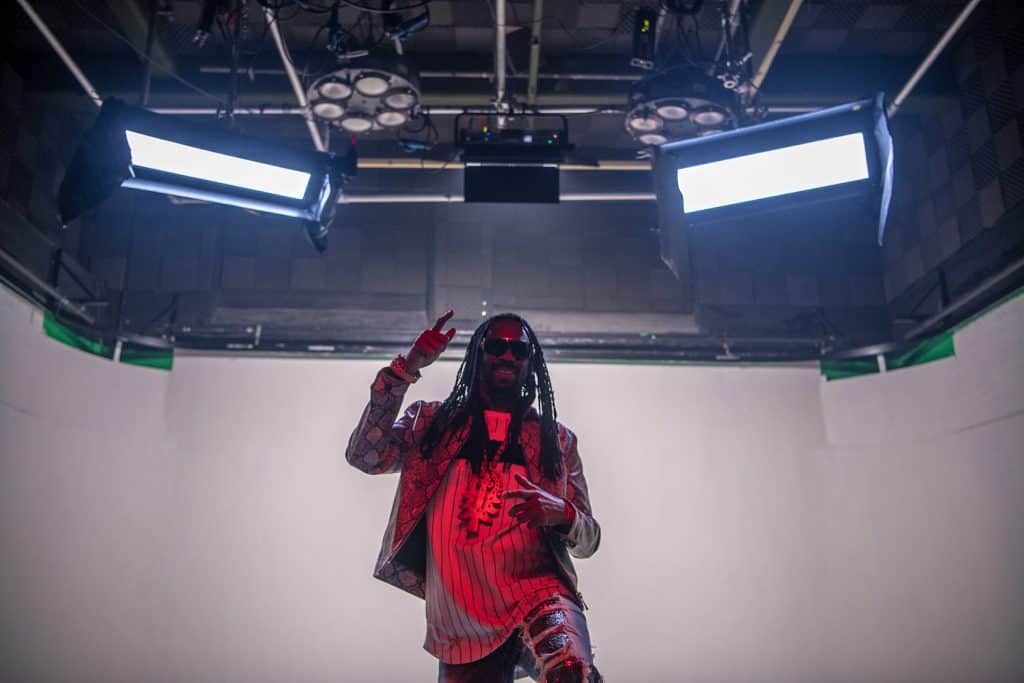 “Coming into the project, it was essential to showcase General Levy as the energetic showman he is. This required us doing several setups and lighting changes all based around his performance – rather than a strict narrative. Therefore, we were up against it time-wise and needed all the help we could get to pull this off.

We knew we needed sizeable studio space to achieve the wide camera angles and moves. We wanted to blend seamlessly between in-camera live-action and VFX techniques. We were creating particle/waveform versions of General Levy and the other talent that can slowly blend and scatter between each other. One of the performers we planned on was a fire dancer, so needed to make sure we had enough space for her to perform safely.

We had set our hearts on a circular track and crane configuration; which Studio 1 would have had the space to facilitate. However, after a few phone calls and emails exchanged with the team at the studio a better, cheaper and faster option was thrown our way. A motorised turntable! Genius, this meant rather than a big grip set up we could put our talent on a turntable and spin them rather than the camera. We had a quick test day arranged by the studio, and as we were on a plain background, it created the effect that we were dollying around them. This also meant our grip only had to concentrate on the crane motion providing much more precise and stable shots.

The lighting grid was also beneficial. Having recced with our gaffer, she was able to incorporate it into her and the DOP’s lighting plan. Meaning we could minimise stands by rigging off the ceiling/sidewalls and maximise our space for the crane and track to move in. As we weren’t having to shift positions about and were using the Luminair app to control all the lights via an iPad, this meant lighting changes were fast and programmable, which in turn helped the AD speed us through our many different setups for this video.

The free coffee was excellent, but what stands out the most after completing our shoot at Camberwell Studios is the positive and can-do attitude of the staff. Yes, usually is the answer and there is a solution-orientated focus to any problem. For example, many other studios would not allow us to use the fire performer. However, Camberwell took their time to make sure we had done the proper safety checks and also provided us with the necessary safety measures/procedures on the day. This which meant that we could shoot what we wanted to shoot while still keeping things safe.

Camberwell Studios is the ideal environment for creatives & directors while still being affordable and keeping our producer happy and on budget. We would happily recommend this studio to other creative projects out there!”